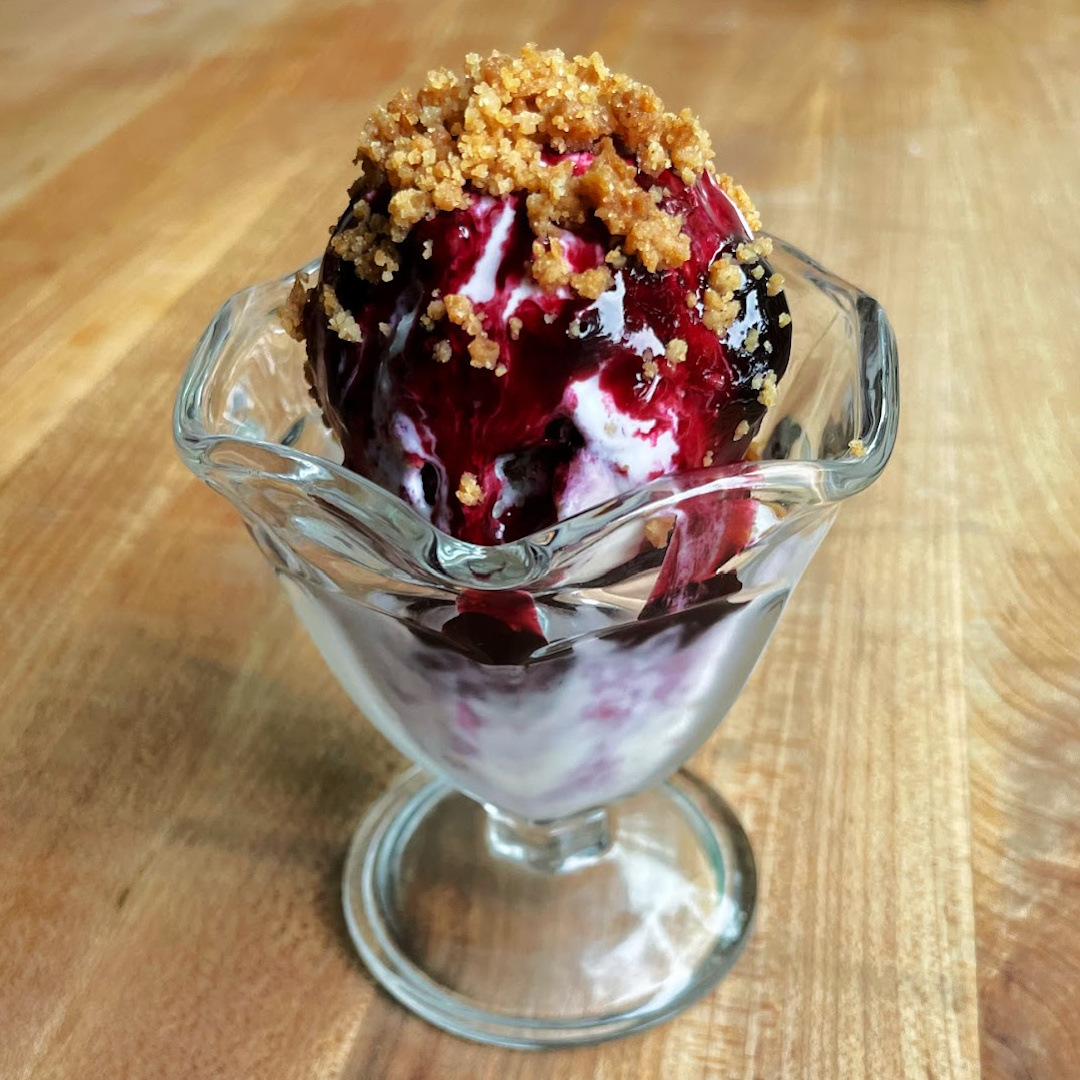 Have your cheesecake and eat it too with this insanely delicious and easy-to-make ice cream! Brandy keeps the blueberry sauce soft in the freezer and doubles as a flavoring agent, giving the sauce some serious depth with notes of vanilla and caramel without being overly boozy.

Preheat oven to 375 F. Stir together the flour, brown sugar, granulated sugar, salt, and cinnamon in a mixing bowl. Work the cold butter into the flour mixture with your fingers, a pastry blender, or a mixer fitted with a paddle attachment. Mix until it starts to come together and has a crumbly but not sandy/dusty texture. Divide the crumble onto two separate trays lined with parchment paper. Place one tray in the freezer /fridge to harden, then pack into a container and place in the freezer for later use. (See note*) Place the remaining tray in the 375 F oven and bake for 12 minutes, rotating halfway through. The mixture should be golden brown and fragrant. Allow to cool at room temperature, breaking up any pieces larger than an almond. Set aside in a container for assembly.
Note* The crumble can be made ahead and refrigerated raw for a week or frozen for several weeks. Just pull what you need and bake it from frozen if making ahead. You will only need to bake half of this crumble recipe for the ice cream, but it doubles as a fruit crisp topping, so freeze the remaining dough for later use. Save this crumble to bake on its own for topping ice cream, sundaes, or anywhere you want a crunchy, sweet, garnish. Store in the freezer until ready to use, then spread onto a tray and bake at 375 until golden brown, about 12-15 minutes. Double, or quadruple this recipe, reserve what you need for the ice cream, and store the rest in the freezer to use as a topping for your favorite fruit crisp. My favorite fruit crisp: For every 4 cups of fruit, toss with ¼ cup sugar, 1 Tbsp all-purpose flour, a pinch of salt, and a squeeze of lemon. Place in a baking dish, top with about 3 cups of crumble topping, and bake at 375 for about an hour, until golden brown and bubbly.

In a medium, non-reactive saucepan, cook the blueberries, sugar, and pinch of salt on medium-high heat until the blueberries release their juices and begin to boil. Mix together the cornstarch, water, and lemon juice to create a slurry and add it to the blueberries. After mixing in the slurry, add in the brandy and bring the mixture to a rolling boil. When the sauce comes to a boil, reduce the heat to a simmer and cook for about 2 minutes. Transfer the sauce to a container to cool completely. Keep cold until assembly. This recipe makes about a cup of sauce, more than you need for assembling the ice cream. Enjoy the remaining sauce drizzled over ice cream, swirled into yogurt, mixed into whipped cream, shake it into a cocktail, spoon it over cake, or just eat it with a spoon. This sauce can be stored in the fridge for up to 5 days.

Zest the lemon directly into a blender or food processor, then add the remaining ingredients and puree until smooth. Chill the mixture thoroughly in the fridge, then freeze it in your ice cream maker according to the manufacturer’s instructions. See assembly instructions before churning.

Before you begin churning the ice cream, place a 1-1 ½ qt baking dish, container, or loaf pan in the freezer. Keeping your ice cream container as cold as possible prevents it from excessively melting during assembly. This can even be done the day before you churn your ice cream. While the ice cream is churning, gather the crumble and blueberry sauce and place a spoon in each one. The ice cream should thicken to the consistency of sour cream when it is fully churned. Once the ice cream is fully churned, place one-third of it in the bottom of the frozen container and quickly spread it out with a spatula. This part doesn’t have to be even, just roughly cover the bottom. Spoon about ¼ cup blueberry sauce over the ice cream, then follow with a thin layer of crumble. Top with another ⅓ of the ice cream, roughly spreading it out, but don’t drive yourself crazy— some gaps are fine. Top with another layer of blueberry sauce and crumble, then top with the remaining ice cream, roughly spreading it out. Drag a spoon through the ice cream a few times to swirl, then place in the freezer to firm up for at least 2 hours. To store, wrap tightly in plastic wrap, or use a container or dish with a tight-fitting lid. Scoop and top with additional blueberry sauce and crumbles if desired.
Ice cream with mix-ins is very forgiving! If at any point in the assembly process things get too melty, just chuck everything in the freezer for 15-20 minutes to cool down. It’s much better to work quickly than to spend too much time trying to make it look perfect or totally even— it all gets swirled together in the end anyway!
More Baking Recipes 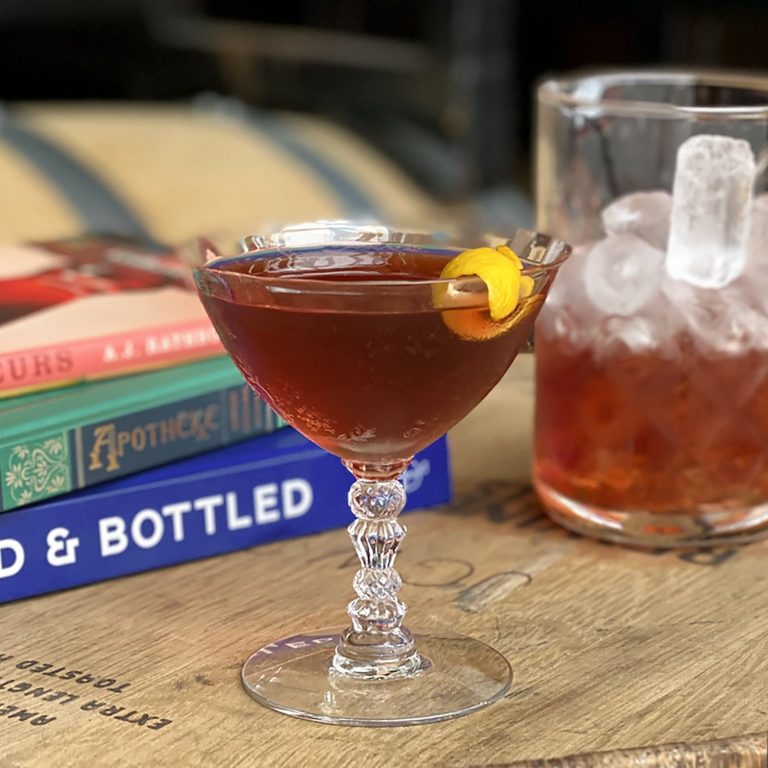 For International Women’s Day we wanted to celebrate with something strong and bold, like this classic, spirit-forward cocktail. 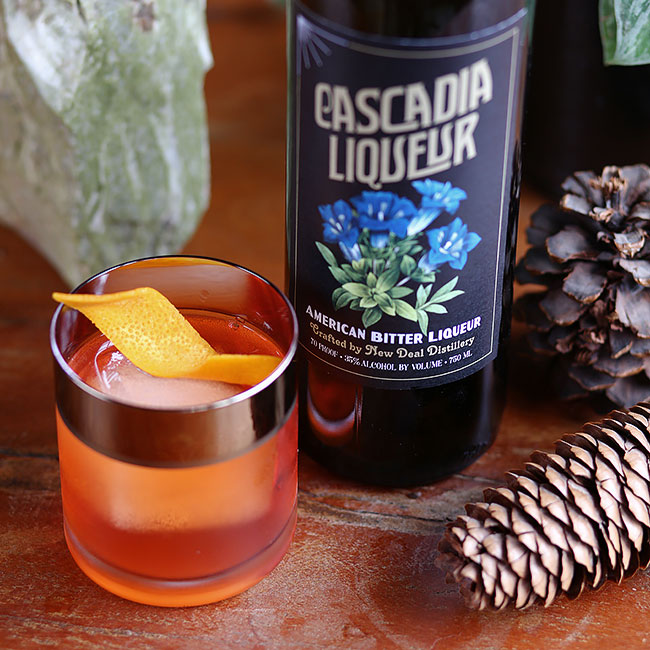 Our spin on this New Orleans classic is sure to make the good times roll. 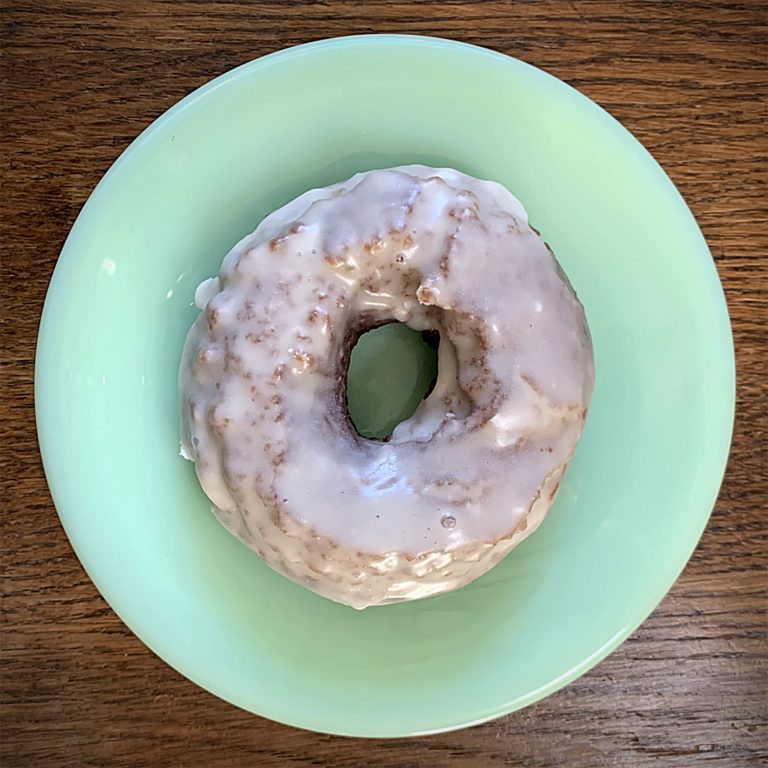 You’ll love this grown-up version of a pumpkin patch apple cider donut and in case you are wondering… yes, they are delicious. 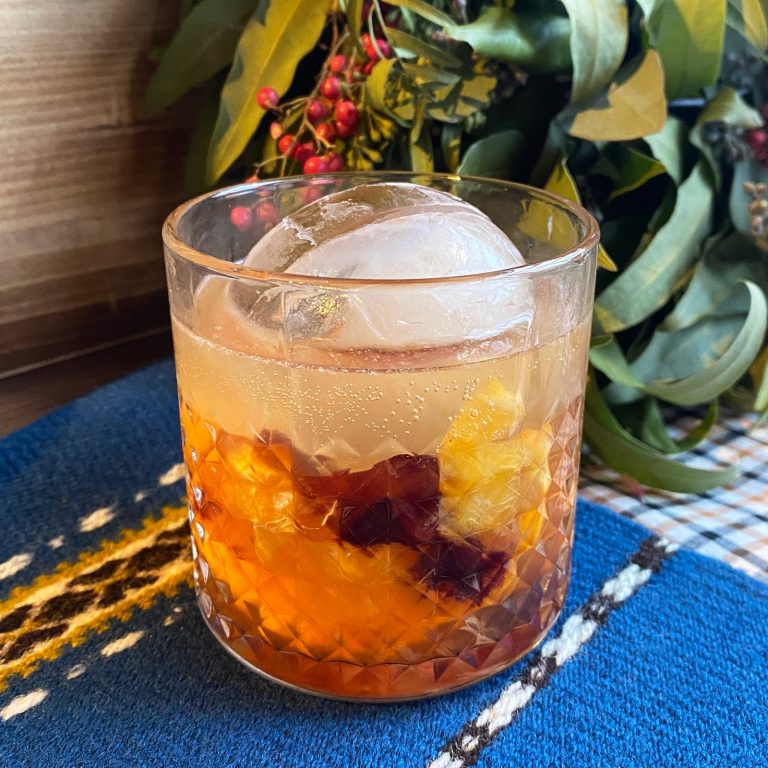 Pick up
your spirits!